The 82-year-old actress shows emotion as she is given an overwhelming standing ovation by the audience. 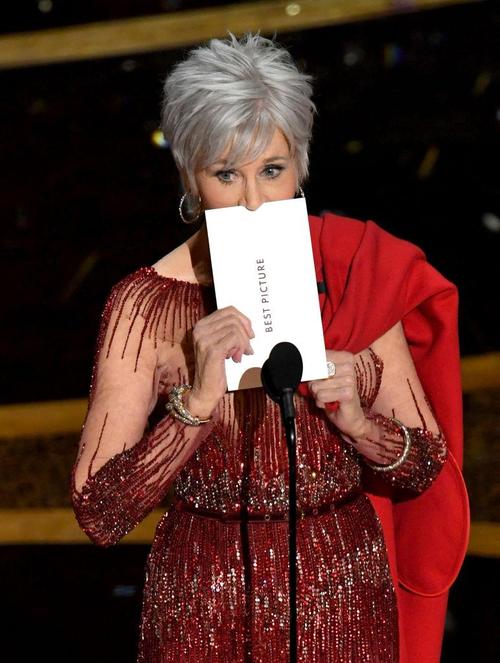 The two-time Oscar-winning actress and political activist–most recently known for her video on Chase Bank’s investments in the oil industry–Jane Fonda, was the final presenter to close out the 92nd annual Academy Awards.

Fonda, aged 82, graced the Oscars stage at the Dolby Theater in Hollywood, California in a sequinned, red Elie Saab gown. She donned the same gown, in fact, during the 2014 Cannes Film Festival, but this time paired with a red coat slung over her shoulder.

The unstoppable Jane Fonda became visibly emotional after the audience honored her with a standing ovation. 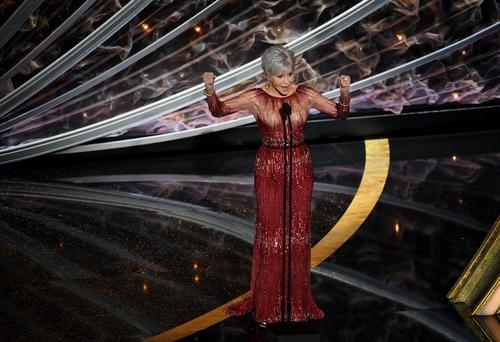 Once the audience settled and before presenting the nine Best Picture nominees, Fonda said, “nothing is more important than raising awareness, right?”

In this statement Fonda was making both a reference to the power of films’ ability to make both individual and societal impacts and also a nod to her own activism as displayed through the re-wearing of her gown.

Jane had previously publicly claimed before as a part of her activism that she would never buy new clothing again, and her choice to rewear the same gown that she had worn at the Cannes Film Festival six years ago was a testament to her stance on carbon footprints and ecological responsibility.

Now carrying the famous red ‘climate change coat’ from the same announcement, the 9 To 5 actress has been arrested in that very coat now five times since she declared it as her last clothing purchase last November.

Jane also decided to show-off her awards event jewelry in an Instagram post with a selfie of her in the Pomellato jewelry. In the caption, Fonda explains her choice of jeweler saying it was “because it only uses responsible, ethically harvested gold and sustainable diamonds.”

Jane Fonda then went on to announce a historic win for the Best Picture Oscar, Parasite, as it is the first-ever first foreign language film to win the category.

The winner and the announcer had a moment of synchrony, as Parasite was received by critics as a film that commented on disparity of wealth, the class system, and family dynamics.

Jane Fonda was nominated for an Oscar seven times and won the award in 1972 for her lead role in the film Klute. She won her second Oscar for the Vietnam war film Coming Home.

Fonda currently co-stars as an often drunk ‘Grace Hanson’ in the Netflix series Grace and Frankie along with former 9 To 5 actress Lily Tomlin.

The popular Netflix series will return for the final seventh season in 2021.

What do you think of Jane Fonda’s reused fashion choice? Would you rewear a ravishing red gown? Pass this along so others can weigh-in on the star’s bold choice.

100-year-old Tuskegee Airmen honored during State of the Union