Country music legend Kenny Rogers, who died last week at the age of 81 at his home in Georgia, is survived by five children and his fifth-wife, Wanda. Kenny, Wanda Miller and their two twin boys who were born in 2004 have an interesting family history together. 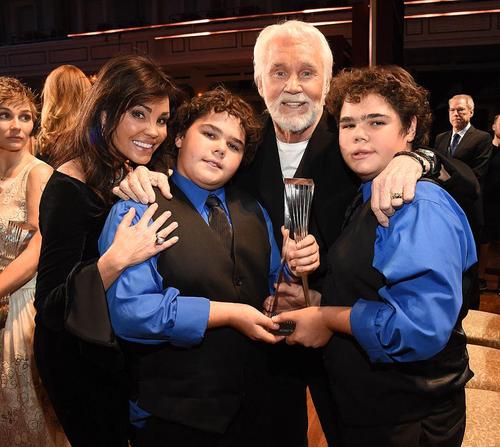 Rick Diamond / Getty Images Entertainment / Getty ImagesFamous for pop-country hits like Lucille, The Gambler and Don’t Take Your Love To Town, the late Kenny Rogers had a rollercoaster of a life. Born into a troubled family in Texas, Rogers began topping charts in the 1970s and ‘80s thanks to his appealing pop-country crossover hits, according to the Daily Mail. That led to a series of duets with Dolly Parton, who became one of Rogers’ close friends in the ‘80s. According to the Daily Mail, some even speculated whether Rogers had a fling with Parton, bolstering Rogers’ long-lasting reputation of being a lady’s man.

But after remarrying four times and having three children, it seemed like Rogers finally began to settle down when he met his fifth and final wife, Wanda Miller, at an Atlanta restaurant in 1991. True to his reputation as a lady’s man, however, Rogers actually met Miller, a restaurant hostess, while on a blind date with someone else, according to Nicki Swift. The date was going alright, but then he saw Miller, 28 years his junior — and for Rogers, it was love at first sight.

“I don’t know what and I don’t know why, but there was just something incredibly different about her from the minute I saw her,” Rogers wrote in his 2012 autobiography, according to Nicki Swift. “She had a smile, not a hostess smile, but something more genuine, and believe it or not, it rocked me to my core.”

A little more than a decade after that fateful day, Rogers and Miller were still married and were expecting twin boys, Justin and Jordan, who are now 15 years old. Rogers regularly posted photos of his wife and his twin boys on Instagram for occasions like Mother’s Day and Christmas. Last summer, on his birthday, he posted a photo of his family, writing: “Thank you all so much for the birthday wishes! I’ve had a great day at home with my family, and we’re about to cap it off with dinner and a movie!” Over the years, it’s become clearer that family has become important to the singer. After getting into his mid-70s, Rogers, who had been on the road his whole life, even decided to stop touring in part to spend more time with his children, according to CMT.

The Rogers family would like to thank you for the generous outpouring of love and support coming in from all over the world these past two days. It’s a beautiful reminder of the positive impact Kenny has had and will continue to have on so many. The music lives on! #SweetMusicMan {Photo by Randy Dorman}

“I hope my fans understand that I’m a father first and a singer second,” he told CMT in 2016. “I’m missing some very great parts of my boys’ lives. I know as well as anybody else how that time gets away from you. And I don’t want to miss it. I just worry about how much longer I’m going to be here, and I want to have time to spend with them. It’s pretty simple.”

Thank you all so much for the birthday wishes! I've had a great day at home with my family, and we're about to cap it off with dinner and a movie!

Did you know that Kenny Rogers had twin boys, or that he met his fifth wife on a blind date? Let us know, and make sure to pass this on to all the Kenny Rogers fans you know.